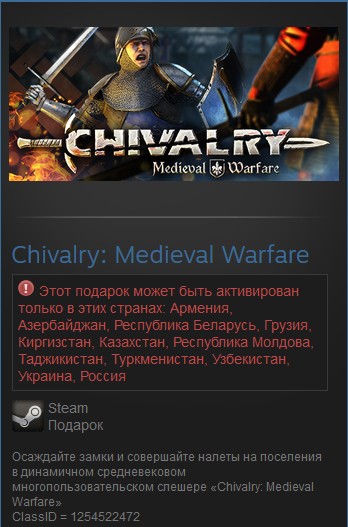 Vladimir2016 information about the seller and his items
offlineAsk a question

Plant the castles and raid the settlements in the game" Chivalry: Medieval Warfare "- a dynamic medieval multiplayer slasher with a first-person view.
Chivalry: Medieval Warfare - a slasher with a first-person view, focusing on a multiplayer game. The game includes team multiplayer battles in the medieval battlefields. Inspired by intense and epic medieval battles from films such as "300 Spartans", "Gladiator" and "Braveheart", the game tries to convey a similar atmosphere of battles and players.
Gameplay and control are similar to the games of the genre of the first person shooter, only instead of firearms and grenades the player uses swords, shields, maces, axes and bows. In this fictional, but very realistic world, players in multi-player, dynamic battles will besiege castles, raid medieval villages and fight for glory in an arena containing up to 32 players.